Starting from £125.00+ VAT* *Starting price based on having a See Survey Only - Max 10 Linear MetresGet your Estimated Price See Drain Survey Footage 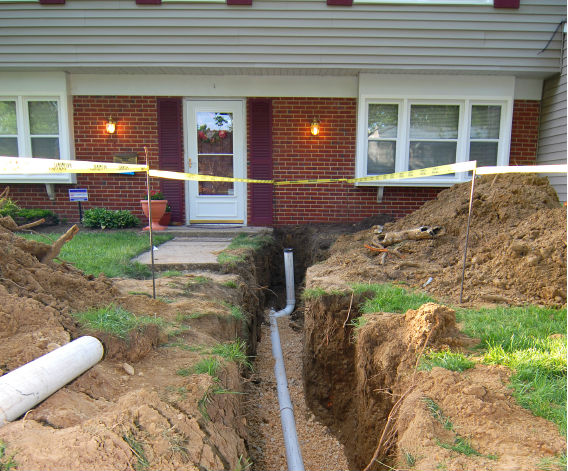 Running throughout our homes and businesses, transporting water and waste frequently each day, drains are a key part of our properties. Unfortunately, they’re not invincible, and they will encounter a problem or two at some point in their useful life.

What’s important is how quickly drain problems can be resolved, how they are rectifiable and how much said rectifying will cost you. In this article, we are going to look at what drainage problems you can expect your insurance to cover for, and what you might have to cover yourself.

(It is important to note that many buildings insurance policies cover accidental damage as standard, but what constitutes ‘accidental’ damage varies according to each insurance provider.)

This is not a cut-and-dry issue, unfortunately. The main problem with blocked drains is that they are often caused by people causing them through careless mistakes. Flushing things down the toilet that actually need to go in the bin, such as baby wipes, or pushing food down the plughole instead of binning it; these are all things that contribute directly to blocked drains. If your drains have been blocked through improper use, then it is unlikely that your insurance company will pay out for it. However, if the blockage is a result of landslip or subsidence, or something else that is out of your control, then you will probably be able to claim for it.

Burst pipes should be covered in your insurance policy, however one caveat of a lot of policies is that pipes that burst due to old age or corrosion are not covered. If your pipe is in otherwise good condition and it bursts, then your insurance company is likely to have you covered for that.

Pitch-fibre pipes were very popular in the 1950s and 60s, and they are still present in plenty of households and businesses today. The problem with these pipes is that they have long-since been improved upon, with clay and heavy-duty plastic pipes taking their place. For properties that still have pitch-fibre pipes, damage to them may not be covered by insurance – they are deemed now to be outdated and of poor quality, and susceptible to collapse under a much lesser load than one which would trouble a clay or plastic pipe. Contact your insurance company to see what their rules are regarding pitch-fibre piping.

Many people assume that this is covered by buildings insurance policies. However, many providers see leaking pipe as a ‘maintenance issue’, rather than accidental damage. Because wear, tear and age of the pipe can come into play here, it is assumed that it does not fall under the ‘accidental damage’ category. The tracing and accessing of said leak should be covered, whether it’s underground or within your building.

Clearing a blockage in a sewer pipe is a matter of the utmost importance – the longer the blockage is in place, the more the backlog of waste builds up, which creates awful smells, as well as the risk of a quite horrendous leak onto your property, which can present a serious health risk. Your insurance policy will likely cover the finding and clearance of a sewer pipe blockage – again, this may hinge on whether the damage is caused by a natural occurrence, such as tree root ingress, or through improper usage.
—
Buildings insurance can be confusing and overwhelming, especially to those who have not owned property before. Express Drainage Surveys can be relied on to handle drainage issues such as repair work, blockages & more. Get in touch with us today; we’re happy to help.

Open 6am - Midnight Fast response in under an hour, 7 days a week